An "emerging" indoor air quality problem is soot from candles.

The "discovery" of sooting in homes from candle burning has accompanied the rapid growth of a multi-billion dollar business.

Defenders of the candle like to point out that it has been around for a long time and nobody complained before.

Since before recorded history, humans have lived close to fire.

This is one reason for the very short lives our ancestors lived.

The standard of living enjoyed by royalty just a couple hundred years back would be extremely uncomfortable for the majority of Americans today.

This was because smoke and soot, accumulating near the ceiling, had to be exhausted from the windows.

It wasn't called the "dark ages" for nothing.

The fact that our forbears used candles is insufficient evidence of their safety.

Only about one hundred years ago whole families would cluster around the light of a single candle, they couldn't afford more. If company came they lit another.

Despite the availability of electric and battery-powered lights, most modern homes have at least one candle.

Everyone should have an emergency light source, but today's candle has gone far beyond that.

Yesterday's essential light source has been transformed into a romantic and festive mood-setter by marketing muscle.

Can you guess what industry needs to unload tons of heavy petroleum base products, waxes and paraffins, after light distillates are piped away?

And studies show the marketing barrage has worked, especially on the female of the species.

In one survey, 96% of female respondents indicated a candle purchase in the last 12 months.

I actually overheard the following conversation once:

First male. How was your dinner at the restaurant with that new first date?

Second male. We never made it there, when I got to her house the candles were lit.....

I know a majority of my readers are female, and that they are smarter than this!

Now that other forms of "romantic" lighting are available, we can just say no to routine candle burning indoors.

Actual fire is virtually invisible to the naked eye.

It is merely heat created by a chemical reaction.

The light we can see, that is called flame, is the luminescence of carbon particles which are very hot but do not burn completely.

When a hydrocarbon chain molecule, like candle wax, is heated, its molecular structure breaks down.

When hydrogen atoms from the wax chain combine with free oxygen to create water, non-combustible carbon atoms are released.

These combine to become soot particles consisting of thousands of carbon atoms.

In the hot flame these particles become incandescent and glow, so giving the flame its familiar yellowish-white color.

This is what we see as a flickering flame, the glow of rising carbon atoms. As the particles rise, they cool and stop glowing, they are now black candle soot.

Particles of soot from candles have a positive charge which causes them to clump together around negatively charged airborne particles.

This flocculation creates a snowball effect until the resulting charged clumps are too heavy to float.

They fall or stick by electrostatic attraction to everything in sight.

When soot attaches to walls, drapes, and furniture, cleaning will be difficult.

Good luck getting your electrostatic air cleaner collector plates clean after the candles go out.

Homeowners have had some real shocks when they got the cleanup bill for the damage candles cause.

Environmental damage disclosure standards which must be met for real estate financing are coming.

Of course candles are not the only soot source in many homes; fireplaces, gas appliances, smokers, and other particulates are also present.

Frying raises many oils above their smoke temperatures.

Anyone living near interstate highways or industrial sites gets lots of soot through their HVAC system.

But many who would work to exclude these unhealthy intruders will unknowingly accept the "romantic" mood setting, festive candle.

New "aromatherapy" candles have gained popularity which disperse scent chemicals in addition to the traditional flickering light and black soot.

That "fresh" scent comes from volatile oil added to the wax.

Stronger scents come from higher concentrations of oil in the air.

Fragrance oils are unsaturated hydrocarbons and they soften the wax so that it doesn't burn as hot. Cooler burning produces extra soot.

As a candle in a jar burns down inside the container, oxygen, needed for a clean flame, is reduced.

I personally need all the oxygen inside my home myself.

"So what’s wrong with a little candle soot?"

The winter months, while homes are sealed against the weather, have the highest candle consumption.

Candle soot has a composition similar to diesel engine exhaust!

Sub-micron soot from candles is .06-.1 micron in diameter. These particles are dangerous deep lung penetrators.

Particles of this size can go right through home air conditioning filters.

Soots' small carbon core acts as a carrier for many types of toxic molecules.

Metal core wicks, formerly made from toxic Lead, have not been made in America since 1974.

Since there are no standards or labeling requirements, imported candles may still have metal wicks.

Most U.S. made candles now have cotton wicks, though a few zinc-core wicks remain.

Candles are a leading cause of home fires and fatalities.

I do not see how any oxidative (burning) process can do this.

Those with asthma, allergy, MCS, or respiratory problems are advised to remove all sooty candles from the home.

Soft candles outgas toxic petrochemicals when they are just sitting around waiting to burn.

Who would buy an air purifier to improve their health and then clog it with candle soot?

My regular readers know my warnings about scenting in general; nothing should be routinely distributed in home air.

For better health remove all combustion sources, nothing should burn inside a home.

I know a few people are calling me the "Grinch", a real party pooper.

So of course, birthday cakes with candles are an exception, just let the child blow them out after a minute and ventilate the room. 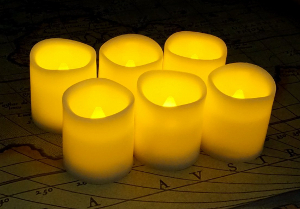 After approximately 15,000 nights together, now in our late 60's, my wife and I are no longer in need of romantic mood setting.

But she loves her battery powered candles to mood-light the bath, where she relaxes and meditates.

There are numerous examples at Amazon;