I’ve had many individuals over the years, either casually in person or via the website, approach me on the subject of nail polish and nail polish remover; I thought it’s about time to share my insight on the subject.

Cruising through the continental US, it might lead you to believe that there are literally hundreds of thousands of nail salons, at least one on every corner in each little town. Nails Magazine states that there are nearly 400,000 active nail technicians licensed in the lower 48 states, and, a robust number of nail salons, close to 70,000.

Obviously mani’s and pedi’s are very popular across a wide spectrum of individuals. Primarily young and middle aged women.

Let’s focus on the role of an air purifier, for those that must paint their nails.

Noise level would be a concern, as you hope to get this individual to work close to the filter.

This type of query reminds me of a pop lyric from my adolescence, All-American Boy, written by Bobby Bare in the late 1950's;

"Well, I'd practice all day and up into the night

My papa's hair was turnin' white

Cause he didn't like it, my rockin and roll

He said You can stay, boy, but that's gotta go

As a teenager, I built model cars and airplanes, often holding my face close to the paint jar and brush, trying to get a flawless finish with each brush stroke finely held refining my abilities. Solvents were used to clean brushes and hands.

I attribute my lifelong multiple chemical sensitivity largely to these early and intensive VOC exposures.

There are no words that can adequately describe the suffering that millions endure with MCS/fibromylagia/chronic fatigue, but I heard that a couple such folks were clients of Dr. Kevorkian. In case you’re unfamiliar, as a Michigan pathologist, Dr. D, was in the limelight for championing a terminal patient’s right to die via physician-assisted suicide.

The first thing I'd do is try to persuade the young woman that this practice is harmful, especially if she ever plans to be a mother.

Nail polish and the solvents used to remove it are highly controversial.

Federal authorities like CDC and FDA say there is no evidence that nail polish is harmful, while some environmental groups disagree.

Nail salon operators, with their obvious deep scientific expertise, say their long life expectancy is evidence of the biological safety of these products.

I'm not holding my breath waiting for them to complete their longevity experiment before making up my mind on the blatant dangers inherent in nail polishing. Or waiting for the political gears to slowly grind - authorities in California have taken the lead due to federal stalling.

Nail polish contains chemical agents linked to birth defects, and producers are not always honest about what's really in the bottle. There aren't really any labeling standards.

Nail products may contain hundreds of potential toxins, but three are most publicized.

Dibutyl phthalate (DBP) is a plasticizer found in nail polish and nail hardener, though manufacturers are trying to phase it out. DBP is associated with birth defects and women of reproductive age are widely advised to avoid exposure.

Toluene is used in nail polish and nail glue. I worked in a print shop, before I knew better, where one guy became addicted to toluene and nearly died.

And last but not least, good ol' formaldehyde.

My Page Air Purifiers for Formaldehyde illustrates the difficulty, and high expense, of removing formaldehyde alone from residential air.

The European Union has banned DBP in nail products, and has set limits on formaldehyde and toluene.

Air purifier builders have made numerous machines intended for the nail salon industry, but these are all commercial grade air cleaners with $1000-plus price tags.

In salons, where lots of emery board filing is done, nail dust is part of the problem, so particulate filters are included. 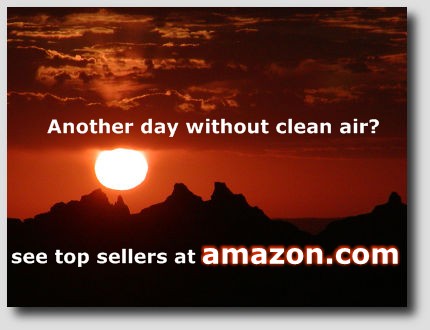 Due to the close-to-the-face nature of nail polishing, intercepting these VOC's before your daughter can breathe them will be a real challenge.

An air purifier creates a zone of cleaner air around itself, with the cleanest air within five or six feet from the machine. Air quality declines rapidly as distance increases.

The first thing you should be doing is making sure the room is well ventilated, an exhaust fan or window fan would be best. This might draw the chemical laden air outside, away from other family members.

One potential option is the Edsyn Extractor FXF11, a bench top fume extraction system designed for workstations in the electronics industry. When soldering, there is a visible plume of rising smoke. The adjustable arm allows workers to bring the extractor close to the work.

These are advertised as having "two stage" carbon filtration, with a rotating filter ahead of a thicker fixed carbon filter.

Edsyn also markets a very comparable product targeted at the beauty industry, the FXF14. The products look very similar to the FXF11. The real difference between the two is that the FXF14 only tilts the heads; whereas, the FXF11 has two joints of pivot.

The Edsyn's throughput, quoted at 49 cfm, is surprisingly robust. Noise cite is 53dB(A), not the quietest.

User reviews suggest the Edsyn lets some vapors escape, but it is better than nothing.

As a stopgap minimum measure, I'd get the FXF11 right away, planning to replace filters often.

But I recommend thinking bigger as time and money allow.

For these VOCs you need a filter that uses a carbon/zeolite mix with added potassium iodide.

If I have to recommend one air cleaner for your situation, the E. L. Foust AN160DT Desktop Air Purifier comes to mind.

The Foust is designed as an all-carbon VOC unit, with HEPA filters optional. And the company is very good at providing, and helping users experiment with, elaborate carbon mixes to solve VOC problems. If you call (800.353.6878) and describe your issue, they will recommend a broad spectrum odor adsorbent media from their list of carbon choices.

Remember not to handle excessively, or try to wash, iodide or other oxidant carbon mixes.

As a last resort, if your finances are very limited, you could use a cheap air cleaner like the Honeywell 16200 or its successor the HHT-011, as a carbon receptacle.

You could remove the particle filter and stuff the chassis with inexpensive cut-to-fit carbon-impregnated cloth, like the 48 by 16 sheet sold at Amazon.

While there is no perfect solution to exposure to nail polish chemicals, these options should help with long term exposure.