Ionic Pro is an example of the air purifier "ionic" class over-simplification problem: anything electronic can be called an "ionizer."

(The Pro is actually an electrostatic precipitator.)

This class of machines persists despite well publicized anti-ozone attacks by Consumer Reports, though sales are a fraction of the glory days.

Consumer Reports magazine dismissed the "ionizers" as a class, creating much confusion as to which ion generating models were implicated.

The "Pro" is a reverse-engineered Chinese knockoff of the once dominant Sharper Image Ionic Breeze.

Consumer reviews are of two minds about the "Pro", with hundreds of opinions now posted on the web.

Three-star-and-change average ratings at Amazon.com, Best-Buy, Wal-Mart, Target, and epinions.com are divided between those who just love the fresh scent (just like Ionic Breeze), and those whose new Ionic Pros proved a big disappointment.

Reading these user reviews brings back memories of the defunct Ionic Breeze - so many buyers are overjoyed at the "clean smell," quiet operation, and supposed economy due to lack of filter purchases.

Unfortunately for its rating score, the Ionic Pro ionic air purifier shares most of the faults of its mentor.

Ineffective at removing smaller particles from air and employing ozone for odor removal, the tower-styled ionic air purifier circulates purified air through a room without motors or fans.

The major selling point for this air cleaner is its silent operation when working properly.

In poor repair or dirty, disconcerting electrical noises may occur.

Users can feel a slight breeze, which proves it moves some purified air.

Using a positive-charged wire ionizer to electrify particles and then attracting them toward negatively charged collection plates, the air purifier creates measurable airflow.

This silent air movement, known as the Zenion effect, would produce a Clean Air Delivery Rate (CADR) which, being generous, I estimate at around 20.

For comparison, Honeywell 50250, reviewed here, moves and purifies about 12 times as much air at a similar cost. The large, rotund Honeywell lacks the Pro's sharp "tower" styling, which many buyers find irresistible.

Here is where the problems start with the Ionic Pro ionic air purifier.

Claimed to clean rooms up to 500 square feet, a removable collection grid with 3 small steel plates collects dust particles as small as 1 micron.

Just walk into Wal-Mart with a hundred and fifty bucks and get about the same coverage as a $600-plus Blueair 503?

The addition of "Turbo" to the name implies increased flow, but there are still no fans or motor.

From the point-of-view of an Ionic Pro review, this seems like a preposterous claim.

But the Ionic Pro ionic air purifier produces ozone, which can last long enough to drift far away from the machine, oxidizing odors.

All the builders were forced to add catalyst filters to cut back ozone emissions following the blast from Consumer Reports.

But since ozone was a chief selling point, the "Oxygen Plus filter" added to Ionic Pro ("Turns smog and ozone into pure oxygen") doesn't eliminate ozone emissions completely.

How much ozone is "converted to pure oxygen" is uncertain, but the modified product is claimed to comply with the evolving standard (less than 50 parts per billion).

This level of ozone triggers asthma attacks - asthmatics are warned NOT to use the Ionic Pro.

But, as with the Ionic Breeze before it, many users with biological particle allergies, like cat dander and mold spores, report symptom improvement.

I suspect the ozone oxidant may alter the proteins in these allergens, and it will certainly kill airborne mold.

Since there is still plenty of ozone, the Pros are still pretty good on odors, but smoking users who owned the older model note reduced ability to remove tobacco odors.

Remember that ozone, while oxidizing some airborne chemicals, also dulls the human sense of smell. Many owners report smelling the fresh ozone for the first few days only.

But the particle filtering of the electrostatic ionizers is always inferior to true-HEPA based purifiers.

One glaring deficiency, often overlooked by users, is the missing decimal point in the Ionic Pro's efficiency specification: "as small as 1.0 micron?"

The 20 micron sized visible dust which collects on the plates, impressing so many naive users, is just the big stuff that a good vacuuming would remove.

In addition, once the plates are dusty, particle collecting efficiency drops quickly.

For my new readers: HEPA spec, which I consider just adequate, is 99.97% of particles at .3 micron. Ninety percent of all particles are smaller than the HEPA's most penetrating particle.

I urge anyone unfamiliar with this terminology to look at the articles under the Technology and Indoor Air buttons on my navbar.

The control panel, conveniently located on top of the ionizing tower, has a power button and four status indicating Light Emitting Diodes (LED).

Many users complain about the bright blue light at night, with several descriptions of makeshift tape-and-cardboard light deflectors on the web.

Here, finally, is a good point for the Ionic Pro ionic air purifier: if the user forgets to clean the blades, a red light comes on and the machine powers itself down.

This innovation should be included on every electrostatic model, because they loose efficiency as plates get dirty. Dirty electrostatic plates can arc and have started many fires.

Unfortunately, this feature is the cause of many manufacturing defects - many new units will go into "red light" shut down repeatedly or prematurely.

Ionic Pro does not use filters; the collector blades are easy to clean by wiping with a damp cloth.

To keep it working, users MUST clean the dust collection blades every three to five days, at an absolute minimum. 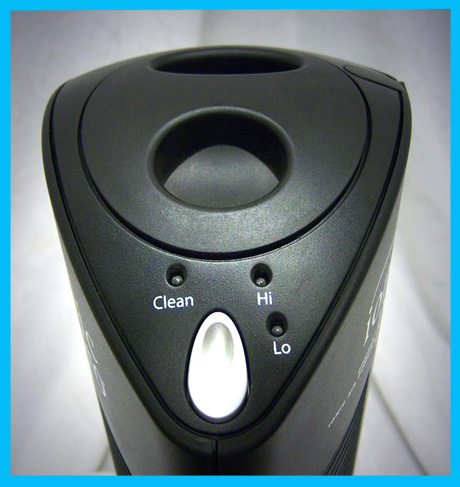 Although the old Ionic Pro was a bit difficult and had to lie sideways for blade removal, the new Turbo Pro is very easy to clean.

Collection blades must be bone dry before reinsertion.

Experienced users recommend buying an extra set of collection blades so you can continue operations while the dirty blades dry.

However, in the shrinking market for air cleaners in general and ionic-electrostatic models specifically, replacement blades are getting scarce.

If you use a slightly damp paper towel to clean the blades, and squeeze most of the moisture out first, the collection blades will seem completely dry within a couple of hours.

This has led many users to ignore the manufacturer's warning about inserting the blades without waiting 24 hours for drying.

One Ionic Pro positive point is the sturdy construction of these plates, some other units have used fragile or sharp collectors.

In all the reviews I read, there were no complaints about bent collector plates.

I sure hope you have already removed all of the above from your breathing-space.

The company wisely ships in black only, to minimize soot staining of the plastic case, which plagues other ionizers made of light colored materials.

Just about every air purifier must avoid moisture, and the Ionic Pro ionic air purifier is no exception: avoid wet/humid areas, like basements and baths.

As is usual with electrostatic models, after a couple months annoying sparking and crackling noises may develop when plates and wires are not kept crystal clean.

Visitors may smell, and mention, the improved odor.

This "fresh air smell" is the main rallying point for vendors and supporters of Ionic Pro type ionizers.

This "scent" is ozone, a strong oxidizing agent. The principal fact consumers should know concerning ozone is that it persists a long time, building up in indoor air.

In technical language: the half-life of ozone in air is approximately 72 hours (3 days).

Many sellers/defenders of ozone air purification misquote this critical fact, using the ozone decay time in water (half-life about 30 minutes) as evidence of safety.

If you are not familiar with this issue, please review the safety issues of ozone, rather than accepting vendor assertions claiming "safe levels."

In a Consumer Reports laboratory test of the ionizer-electrostatic group, the Surround Air XJ-2000 produced the most ozone, 319 ppb, followed by the IonizAir P4620 at 168 ppb, the Ionic Breeze at 48 ppb, the old Ionic Pro CL-369 at 33 ppb and the Brookstone Pure-Ion at 26 ppb.

Air-purifier-power.com is not totally opposed to the use of ozone for air cleaning - it has its legitimate shock treatment uses in mold and fire damage remediation.

What is dangerous is wholesale continuous use by millions of very naive consumers.

Ionic Pros are also positive ion generators: pos-ions are the ones implicated as dangerous in the original ions and health research.

This is part of the misrepresentation by "ionizer" class critics because negative ions are considered healthy.

Some users report damaged units, with increased arcing, after electrical surges: a surge protector might be a good investment.

The three prong plug is intended for use in fully grounded outlets.

The company is in the business of selling low-price-targeted ionic purifiers.

By designing the product in-house, outsourcing production and support, minimizing overhead and using frugal marketing techniques, they deliver a reasonable facsimile of a top selling product at a very low price.

But I liked Ionic Pros better, (though still not recommended), back when the price was $97.

A high percentage of these products are defective in various ways.

Some refuse to start at all, some show the red clean-me light repeatedly (auto shutdown), others seem not to collect much of anything, and many fail completely within a short time.

In fairness, every ionic-electrostatic machine needs to be maintained fastidiously - many users have not read the user manual or get in the habit of replacing the blades when still slightly damp.

This causes irregular microscopic pitting of the Chinese-quality contacts, which over time produces sparking.

In my opinion, this high voltage connection is the source of many failures, including the many "failed to run at opening."

Another arcing source is human/pet hair which accumulates inside the machine and is not removed by cleaning the blades.

One way to compete on price is to lower warranty claim costs.

A 1 year limited warranty with a 14 days to opt out implied-consent arbitration agreement protects the maker, not the buyer.

Due to the large number of claims, the manufacturer included an instructional DVD to help consumers learn to clean the Pro, but many will not watch it.

There are no statistics, but my estimate is that the average life expectancy of an Ionic Pro is just over the 1 year warranty period - just about the time owners of similarly priced HEPA-filtered air cleaners might be looking for new filters.

Yet I see owners of their third or fourth Pro in as many years gush about the filters they don't have to buy.

To be fair, I have seen reviewers who report multiple years of service from Ionic Pros, but they are a distinct minority.

I estimate that the average life expectancy of the $400 Sharper Image Ionic Breeze was about two and a half years - creating a similar planned obsolescence and false economy.

Sharper Image, as they struggled to remain profitable, honored their warranty, - a very significant percentage of units sold were refurbished returns.

But with Ionic Pro buyers get no real warranty.

Customer support by Internet and toll free phone has a poor reputation.

Service is outsourced somewhere in a English-as-a-second-language country, and is reported rude and unresponsive.

Ionic Pro is NOT an alternative to HEPA air purifiers.

In my opinion, Ionic Pro has been carefully reverse engineered to be profitable at its big-box retail price target, and be discarded with a mean-time-between-failures (MTBF) right at the warranty point.

This is not unique, it's part of many made-in-China cost-reduction packages.

So who should buy an Ionic Pro?

People who have educated themselves about the safety issues of ozone can use Ionic Pro Turbo as an ozone source in empty rooms to remove mold, smoke residues, and odors.

Just don't go believing the hype that Ionic Pro is for daily or bedside use.