Hoovers are priced for, and marketed at, entry level buyers.

Several online allergy shops have also picked up the Hoover 600.

Hidden behind the TiO2 label is one of the first photocatalytic air cleaners to penetrate the market effectively.

An LCD 3-color display lights up in red-amber-blue as air quality changes.

The fan can also be manually adjusted among three speeds.

Users report that the 10600 in auto mode is pretty sensitive - my test model red lighted and its fan stepped up immediately when I placed my foot close to the sensor vent.

However, my particle counter testing reveals that Auto Mode tends to shut off too soon, before the room particle level is effectively reduced.

This major shortcoming is common in nearly all automatic air purifiers.

Users can operate the Hoover 600 using either the intuitive control panel or the remote control. There is also a 2/4/8 hour timer function.

This is a low powered air cleaner.

Note that perennially optimistic AHAM has awarded a room size rating of only 79 square feet, a decent closet. 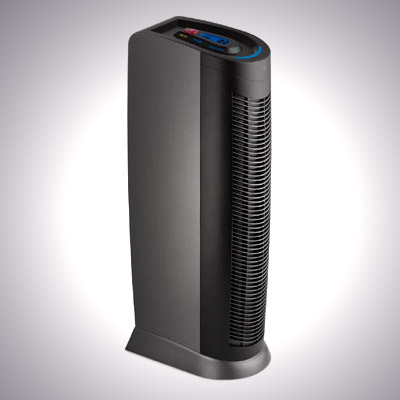 For this review, I will be using the Dylos DC 1100 Pro particle counter. This is the "For Air Purifier Test" model - it reads two sizes of particulate threshold, .5 micron (and above) and 2.5 micron.

Note that these sizes are not fine enough, nor the counter accurate enough, for real laboratory tests of (.3 micron) true HEPA air purifiers.

However, the Dylos is a perfect home-use tool for the typical allergy/air purifier consumer.

You may see some guys doing video reviews using the Dylos, including the less sensitive 1 micron model, copycatting the use of expensive .3 micron laser particle counters to test the exhaust port airflow of whatever air cleaner they are promoting.

This, in my opinion, is not an appropriate application of the Dylos.

I like my DC 1100 and think it is very useful for measuring particle levels in a given room and comparing similar air cleaners in the same room on the same day.

Dylos particle counts are given with a divisor of 100, so when you see a .5 micron count of 24, the actual reading is 2400 particles per cubic foot of air.

According to Dylos, the following readings on the small particle (left) side of the meter correspond to air quality;

It measures just 10 by 10 feet and has a low sloped ceiling which reduces air volume to roughly the equivalent of AHAM's recommended 79 square feet.

I open the (only) window, let in some dirty air, then close up, wait for particle numbers to stabilize, start the Hoover 600, and time the "test" to see;

1.) how low will the room's particle count get with maximum high-speed effort?

2.) how long will it take to clean the room on various speeds?

3.) are the lower, quiet speeds effective in the size room (small bedroom/office) allotted?

A typical test starts at around 60,000 .5 micron (and up) particles per cu ft (reading 580-620), at which point I close up the room and start the air cleaner on high speed with UV on and click the handy online stopwatch (www.online-stopwatch.com).

After 45 minutes the test ends.

These readings are in Dylos' "very good" range, not "excellent."

Running on low for an entire night fails to produce any improvement.

This leads to the conclusion that many users are breathing dirty air with Hoovers, and many low-powered air cleaners, installed in larger spaces.

In this room I have set up 3 other air purifiers for comparison tests;

1.) Sharp Plasmacluster KC-C150U,
(CADR) at Dust 230/Smoke 224/Pollen 245. This Sharp is discontinued, and sold well above Hoovers' price range, but the next two are price competitors.

Each of these air purifiers can dramatically outperform the Hoover in particle removal tests.

Continued operation produced readings under 2000 at the 11 minute mark.

The 2000 count was achieved in only 6:42 minutes, making the admittedly noisy Honeywell the performance winner.

So the upshot here is: install Hoover WH10600 in a small room and run it on HIGH as much as possible.

The 600 inhales from the tower's rear and blows out the front. This makes it a pretty good cooling fan, blowing on my legs under the desk.

Filters are removed from the rear, featuring a rinse-able and vacuum-able foam-type dust pre-filter first.

The marketing phrase "made with HEPA media," and the failure to achieve under 10,000 particle counts, makes me wonder if this is actually a true-HEPA filter.

With no carbon filter, the Hoover relies on its UV-powered photocatalytic grid (on right in photo) to oxidize chemicals and odors.

From reading the user reviews at Amazon.com, it is clear that most buyers do not realize they have purchased a photocatalytic air purifier.

Buyers should be aware that this is an oxidizing air purifier - those with chemical sensitivity or serious allergy might want to consider turning off the UV lamp, and thus the oxidizing radical generation, when there is no odor to remove.

User reviews suggest the Hoover WH10600 is good at odor oxidation - eliminating the need to replace a carbon filter in light odor environments. The nice ladies on HSN made much of the UV bulb being bigger than competitors, but specs for the bulb - a Lighton UV8-S287W15, from Fusan Lighton, Ltd., Guangdong, China - state 8 Watts. This is modest power, matching the air cleaner as a whole.

Fusan asserts that the lamp is ozone free and has an average life of 9000 hours. Some user reviews report they cannot find the replacement UV/TIO bulb.

This is a more-or-less standard product, users could substitute some other 2-prong, 287mm UV lamp if necessary.

Hoover claims the WH10600 can destroy 99.9% of germs that pass through the UV light.

This might be true, but does NOT imply that the air cleaner can interdict disease organisms, few of which are transmitted by airborne mechanisms.

The photocat TiO2 screen does not generally accumulate debris or coatings. Handled carefully, it will outlast all other components.

UV lamps must be replaced at least as often as the manufacturer's recommended interval, even if they still light up.

Running the lamp only when needed can extend this period substantially.

Hoover WH10600 air purifier is very quiet, and really noticeable only on high.

I have it running on low, and had to turn and verify that as I write.

Unfortunately, as noted above, low is not doing much air cleaning.

User reviews call the high speed sound "white noise" - turning it up to high is not too unpleasant.

The blue "UV on" light, which cannot be turned off without also stopping the UV, is far too bright for me to sleep.

With the UV off, the display still makes too much light.

I cut a cover from light cardboard, attached it with tape.

Buyers should remember never to look at a lit UV bulb, which is concealed by the HEPA filter during normal operation.

Several user reviews complained of noisy button beeping, but my test model beeps so weakly I must hover close to hear it at all.

Another review points out that the Hoover with its ionizer on emits a low frequency tone of 50 hz, but at an intensity of 59 db.

I do not hear it.

Hoover asserts that this ionizer does not produce ozone.

A 75 CADR purifier using 50 Watts does NOT qualify for the minimum EPA Energy Star rating of 2.0 Dust CADR/Watt.

A handle makes the TiO2 air purifier easy to move from room to room.

Tower design produces a small footprint, but rear air intake requires some space behind the unit - it should not be placed tightly against objects or walls.

Hoover Purifier is the same brand name as the long established vacuum cleaner.

But that's where the similarity ends.

Techtronic's strategy of acquiring previously established brands, cutting costs with mainland Asian production, and marketing their products under names familiar to consumers has paid off handsomely for founding partner Horst J. Pudwill, a German engineer with years of experience in Asian manufacturing.

Hoover offers a two year warranty, about the same as my estimated average service life.

As with any mainland China product, numerous issues have surfaced.

Hoover WH10600 air purifier is modern, quiet, and stylish. It is suited for VERY SMALL ROOMS only.

I like this air cleaner at $166, around $200 there are better performers, as demonstrated above.

You can buy the