Most of the market volume in air cleaners comes through the bottom of the price range, where inexpensive Honeywell is the leading brand now that Sharper Image is gone.

So premium brand Blueair has made repeated attempts to design catchy products that tap into the iPad cool that has given Apple Computer a larger cash cushion than the U.S. government.

Blueair's 203 is perhaps the most successful of these stylish downsizing attempts.

The more recent attempt to market an automated version of the Blueair 203, the dual sensor, $400 270e, was commercially unsuccessful.

Still Crazy After All These Years 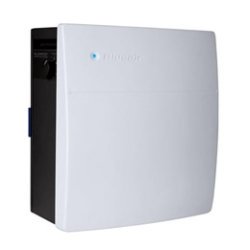 The Blueair 200-series is distinct departure from the technical design of bigger Blueair models.

It is NOT just a smaller version of the HEPAsilent hybrid filter system.

When Blueair 201 was introduced, there was considerable confusion about it's design, with vendors and reviewers misstating the new little Blueair's construction, filters, and ionization sequence.

Fast forward to 2015, and the Blueair 203 still suffers from this same misrepresentation.

This difference continues to confuse vendors and reviewers, who make numerous errors in describing the 203, mostly just using the same verbiage from their page on another Blueair model.

Let's try to clear up the confusion still surrounding the 203. 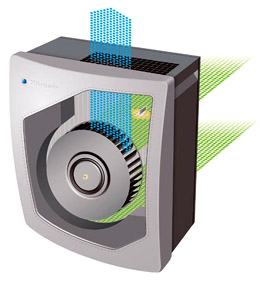 The single filter is mounted on the back of the 203, with a swinging door for access.

Air is sucked through the filter, and then negatively ionized - there is no ionization chamber ahead of the filter - the electrostatic attraction relies on ions circulating around the 203, and returning to the filter.

This is a complete departure from the main Blueair HEPASilent model.


AHAM recommended room size, based on a multiple of Smoke CADR, is 240 square feet.

Blueair advertises 203 for 175 sq. ft., consistent with the lower number.

A call to Blueair Customer Service verifies 203 is still a 115 CADR air cleaner, suitable, in my opinion, for small rooms to 120 sq. ft.

There is no prefilter on Blueair 203.

Just one filter, and the ionizer, make up the 203 filter train.

But, unlike other Blueairs, air must pass through the main filter before entering the case.

This will eliminate the dusty interior issue common on bigger Blueairs.

203 uses a completely different filter, it is NOT a three-stage progressive HEPASilent filter.

The 203's filter encompasses the entire rear of the air cleaner, and is more HEPA-like than other Blueair filters.

I am skeptical about the ability of 203's ionizer to actively charge particles on higher fan speeds.

Blueair makes a point of measuring efficiency on low speed.

This is NOT "better than HEPA" as some vendors/reviewers have posted.

True HEPAs are tested at .3 micron because it is the most difficult to capture, not because they cannot arrest .1 micron particles.

The single polypropylene filter must be changed, clogged or not, every six months to retain warranty coverage.

You will also see 203 Smokestop units, which ship with carbon filters already installed, for $349. 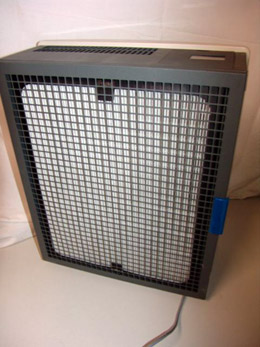 A magnetic digital countdown timer is used to remind users that new filters are needed.

It counts down, and displays the days remaining until filter change. A blue light will flash with 15 days left.

To me, this design cries out for a user-built prefilter, which could easily be placed between the swinging grid-like door and the single filter.

This would void warranty, but so would the doubling of filter life which resulted.

I have not tried this on a Blueair, but do it routinely on other machines.

Try this idea at your own risk.

Many users note excessive noise on high, a whoosh of air release rather than fan motor noise.

203 is made of steel like its brother Blueairs, so there is no plastic off-gassing.

The traditional annoying Blueair blue night light is present, when will they ever learn.

It is too large for end tables, nightstands, or desktops.

203 has built-in carry handles, there are no casters to roll on.

Blueair 203 is warranted for one year, but buyers sending in the registration card will have their warranty extended to five years.

There is a company Filter Subscription Program, which ships factory filters on time and supplies proof for warranty purposes.

Blueair 203, with its unconventional horizontal fan shaft, has had a few more short-term reliability issues than Blueairs in general.

Blueair 203, while not just a baby version of the bigger Blueair purifiers, is a well-built small room air purifier.

It is a good bedroom air cleaner, most buyers express considerable satisfaction with their purchase.

Add another $100 annually for required filter swaps and the tab gets out of hand.

Blueair is a premium brand, but the tech-gift niche they are trying to hit is notoriously difficult.

203 is a nice bedroom air cleaner for the affluent buyer's small bedroom or office, but not cost competitive for average consumers.

This is THE perfect gift for a kid going off to college.

Blueair 203 is available at Amazon.com